A few months back we stumbled upon a blogger in Idaho who, starting in July 2016, has written 6 blogs – All discussing his experience with all the spa purges (also called flush) he could find. He then wrote 2 more blogs on his experiences with SERUM Total Maintenance. His blogs are located here, however I’ve summarized his research below.

Doug Leno bought a Hot Spring Grandee in 2013. He soon had water quality problems. It wasn’t the hot tub. It’s wasn’t his sanitation regime. It was biofilm.
Biofilm can cause all kinds of problems for you in enjoying your hot tub. Some problems are water sanitation issues, as with Doug’s Grandee. Some can be deadly, as Legionella, E-coli and Pseudomonas bacteria can be present in biofilm.

Doug is a scientist at heart and a former hot tub technician  Once determining his water quality issue was due to biofilm, he decided to test every spa purge he could find & completed his tests over several years.

Doug blogs under the name “Boisediesel”. He is very thorough so it will take a while to read everything but here, in his words, are his summaries of each Spa Purge.

Note that SERUM Total Cleanse is the retail version of the Ahh-Some Doug tested.

In Doug’s last two Blogs, #7 & #8, He tests Hot Tub SERUM Total Maintenance and is equally impressed. His conclusion is: 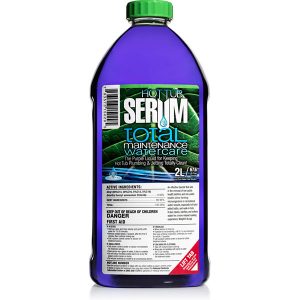 Thanks for reading,
Turbo Tony

Thank you so much for your interest in Serum products. We would love to help answer any questions you may have about our products. Just fill in the quick form below and we'll get back to you as soon as we can!

This website uses cookies to improve your experience. If you continue to use this site, you agree with it.